(CNN) — A yeast infection led to the failure of the first uterus transplant performed in the United States, the Cleveland Clinic said Friday.

In February, 26-year-old Lindsey McFarland, whose last name was previously not released, became the first patient in the United States to receive a uterus transplant. Cleveland Clinic doctors transplanted the organ from a deceased donor during a nine-hour surgery.

McFarland, a mother of three boys who were adopted through the foster system, spoke to reporters in March, less than two weeks after undergoing the experimental procedure.

“I was 16 and was told I would never have children and from that moment on, I’ve prayed that God would allow me that opportunity to experience pregnancy. And here we are today at the beginning of that journey,” she said while sitting in a wheelchair with her husband, Blake, standing behind her.

On Friday, Cleveland Clinic transplant surgeon Dr. Andreas Tzakis said McFarland developed a fever later that day that led to emergency surgery to remove the uterus. “We were watching her very closely. This presented in such an insidious way that it was a surprise.”

A few days later, the hospital announced that McFarland suffered a complication that led to the removal of the newly transplanted uterus. It said no other information was available at the time.

“The complication was an infection with a fungus called candida albicans, which is ubiquitous in a lot of parts of the body, particularly female organs,” Tzakis said Friday. “Normally it resides in people without causing a problem. If someone is immunocompromised it can cause an infection,” he said. That infection then compromised the blood supply to the uterus.

Candida albicans is the most common species of yeast that can cause human infections, according to the Centers for Disease Control and Prevention. “Candida yeasts normally live on the skin and mucous membranes without causing infection,” the CDC website says. However, an overgrowth of these fungi, which can result from antibiotic use, can turn into a mouth infection called thrush or a vaginal yeast infections in women.

Tzakis said the hospital voluntarily put the clinical trial, which hopes to enroll 10 patients, on hold while the team makes some changes to the protocol to prevent the same complication from happening again. These include the use of antifungal medications and some adjustments to the technique, he said. 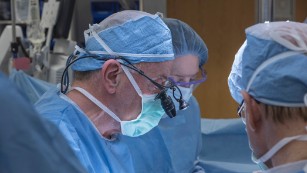 Cleveland Clinic was the first to perform the procedure in the United States but doctors in Sweden have performed the surgery using living donors, in some cases relatives, in nine women since 2012. There have been five successful live births. One transplant resulted in a bacterial infection that also led to the removal of the transplanted uterus, but that infection had not been seen before in humans or animals, Tzakis said.

Baylor University Medical Center in Dallas and Boston’s Brigham and Women’s Hospital are approved by the United Network for Organ Sharing to perform a uterus transplant and have plans for their own clinical trials. There is one patient on the waiting list for a uterine transplant, according to UNOS.

McFarland is doing well, Tzakis said. She “is a wonderful young lady, with a very powerful personality, an excellent family and able to handle this extremely well. She is a pioneer and her heart is all in.”

(WJW) — You can see the “Pink Moon” light up the night sky this month.

According to the Old Farmer’s Almanac, the Pink Moon rises on the night of Monday, April 26. It is the first supermoon of 2021.

It's incredibly difficult to fly in such thin air, but NASA's Ingenuity Helicopter is about to attempt just that feat on Mars.

To talk about the historic test, George Tahu, the program executive for Mars exploration, joined FOX40.

Preliminary results from two experiments suggest something could be wrong with the basic way physicists think the universe works, a prospect that has the field of particle physics both baffled and thrilled.

The tiniest particles aren’t quite doing what is expected of them when spun around two different long-running experiments in the United States and Europe. The confounding results — if proven right — reveal major problems with the rulebook physicists use to describe and understand how the universe works at the subatomic level.

Placer County vaccine eligibility expands to everyone 16 and older Monday

CEOs gather to speak out against voting law changes

Police: Man dies after shooting in Sacramento; no arrests made

Fed’s Powell sees US boom ahead, with COVID still a risk