Burger King has figured out how to serve Whoppers upside-down in 1980s-era packaging and turn that into a marketing opportunity. 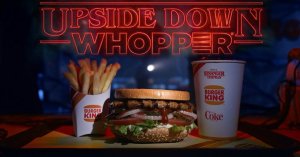 The Upside-Down is an alternative universe in “Stranger Things,” a show set in the 1980s that centers around the lives of four adolescent boys and their friends. The new season premieres on the streaming service on July 4.

If the upside-down part of the promotion isn’t grabbing people, the nostalgia factor might: The upside-down Whoppers will be served with Burger King’s classic packaging from the mid-1980s.

The promotion comes as competition tightens in the fast food business.

Quick-serve restaurants like Burger King are hyper-competitive, fighting for the same audience. Customers are not typically loyal to any particular brand, so fast-food companies resort to oddball, sometimes outlandish marketing tactics or crazy food creations to draw in customers.

For example, Burger King last month rolled out a new Whopper meal box, called “Real Meals,” labeled with different moods and colors. The packaging came in five moods: the Pissed in red, Blue for sad, Salty in teal, YAAAS in purple and DGAF (that’s “don’t give a f—” in internet speak) in black.

In 2017, Wendy’s famously challenged a teen to get 18 million retweets to score free nuggets for a year (he got the nuggets and set a record for the most retweeted tweet). And Domino’s is chasing new clients by rewarding them for eating pizza — even if they buy it from a competitor.

Promotions like the upside-down Whopper get people to flock to restaurants to ensure they get a peek at the strange new offering before the deal ends.

For Netflix, the partnership is a way to advertise in new spaces. Netflix is an internet company, so associating its brand and shows with physical products helps customers think about its shows even when they’re offline, Barry Smyth, head of global partner marketing at Netflix, previously told CNN Business.

The streaming platform is also partnering with a number of other companies, including Lego, H&M, Schwinn and Baskin-Robbins, to promote the upcoming season.

Netflix also teamed up with Coca-Cola to celebrate the show’s upcoming third season. The beverage company rebooted New Coke because the new season takes place during the summer of 1985 — when Coca-Cola debuted the new recipe that flopped.

Coca-Cola pulled New Coke it from shelves after a few months and it was rebranded as Coke II. The drink was sold in some places after 1985. But this is the first time Coca-Cola brought back New Coke with that branding.

Burger King will also include DoorDash delivery as part of the promotion. Beginning Wednesday for a week, it will sell a Whopper meal, which includes a small drink and small fries, for $5 on the app with $0 delivery fees if the whole order costs more than $10. Customers need to enter the code “STRANGER” to access the deal on the DoorDash app or website, where they will be able to watch previews of new season of “Stranger Things.”

Nicknamed "Fitness Gran," Erika Rischko isn't letting coronavirus get to her — and definitely has no plans for sofa bingo. Instead, she is conquering TikTok one pull-up and cha-cha at a time.

SACRAMENTO, Calif. (KTXL) -- The Sacramento Observer will raise its price from 25 cents to a dollar after nearly 60 years in print.

The change comes with a new logo, a new look and a new home for the capital city’s African American newspaper, one that’s captured and honored Sacramento’s Black history while becoming an icon in and of itself.

STOCKTON, Calif. (KTXL) -- Author Anna Malaika Tubbs began looking into the mothers of some of the most notable Civil Rights icons and found their influence, activism and contributions to history largely ignored.

Tubbs is the author of "Three Mothers: How the Mothers of Martin Luther King Jr, Malcolm X and James Baldwin Shaped a Nation."