Police have arrested a co-worker in the fatal stabbing of a retired California State University Fullerton administrator, police said Thursday.

Steven Shek Keung Chan, 57, a former budget director at the university, was found Monday in a car in a campus parking lot. Chan had retired as a budget director in 2017 and recently returned to work as a consultant in the international student affairs office. 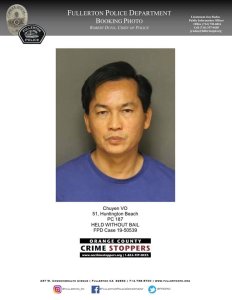 “Fullerton police detectives believe based on their investigation that Vo acted alone during the planning and commission of this murder,” Dunn said.

He added: “We now know that Vo and Chan were co-workers.”

Fullerton police on Tuesday released a sketch and video of a suspect who apparently sought Chan and stabbed him to death, according to the authorities.

The surveillance video showed the suspect running near the crime scene and leaving a parking lot in a black 4-door sedan with black wheels and dark tinted windows believed to be a newer model BMW X6.

Police believe Chan’s assailant left a backpack holding an incendiary device and items that could be used for an abduction beneath the car, authorities said. The backpack also had a knife, which was not used in the stabbing, along with zip ties, wigs and other disguise materials, police said.

The governor said the state had nearly 7,000 cases as of his noon briefing, and 150 deaths.

BERKELEY, Calif. (KTXL) -- Researchers at the Innovative Genomics Institute at the University of California, Berkeley are spearheading a volunteer effort to develop a speeder process to analyze COVID-19 tests using robotics.

While test kits have been coming online at a faster pace in recent weeks, getting test results back quickly to help isolate infected people is still a problem.

The coronavirus crisis will create peak demand on California's health care resources on April 26, but the state will be likely able to meet the need for hospital beds, according to a state-by-state forecast from researchers at the University of Washington's medical school.

The Golden State will see more than 4,300 deaths due to coronavirus, with fatalities continuing into August, the forecast found. The numbers are expected to peak with about 100 deaths per day in late April.

NYC reports 1st coronavirus death of a person under 18

Walmart to begin temperature checks for employees in US stores

Lost your job due to COVID-19? Here’s how to apply for unemployment

‘It could happen to anybody’: Stockton man copes as his family faces two COVID-19 cases, death