SACRAMENTO -- Outside the federal courthouse in Sacramento, where he was sentenced to one year and one day for excessive and deceptive campaign contributions, Babulal Bera, father of Congressman Ami Bera, had nothing to say.

But inside the courtroom this morning, where our cameras were not allowed to go, he did admit his guilt.

"I violated campaign finance law. I apologize to to you, your honor and to the nation," Babulal Bera said.

The court estimated Babulal's contributions made up 10 percent of his son's reported individual donations.

It's something Ami Bera's campaign said they knew nothing about. 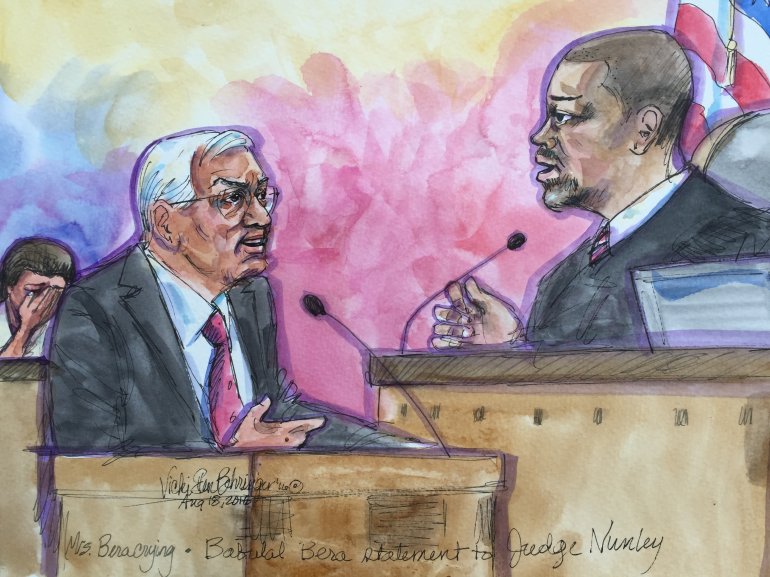 "The U.S. Attorney and authorities did a nearly two-year investigation. The have spoken to more people than you or I could probably even guess about. And they've been absolutely crystal clear that neither Congressman Bera nor his campaign had any knowledge, and that he cooperated fully," said Jerid Kurtz, Ami Bera's campaign manager.

At about four years, the sentencing guidelines for those crimes is much longer than the sentence Bera actually got. But at 83, in failing health, and as the caretaker for his 82-year-old wife, the court reduced Bera's sentence to a year and a day.

His defense had argued for home detention instead of prison, but the federal judge said what Babulal Bera did "cut to the heart of the integrity we expect of our elections," that he would have to go to prison for it, and anyone contemplating doing the same would need to know they would face prison as well.

"I mean, come on," said Doug Ose. "The price has been set for rich families to support their children in Congress. If they're willing to have the senior member do a year and a day and pay $100,000, that's the price."

Ose was Bera's opponent in the 2014 Congressional race. Today's sentence covered campaign contributions in 2010 and 2012 only, but Ose and others claim that an investigation into the financing of Bera's later campaigns is still ongoing.

WASHINGTON (AP) — More than a sweeping national rescue plan, President Joe Biden’s $1.9 trillion COVID-19 relief package presents a first political test — of his new administration, of Democratic control of Congress and of the role of Republicans in a post-Trump political landscape.

For Biden, the outcome will test the strength of his presidency, his “unity” agenda and whether, after decades of deal-making, he can still negotiate a hard bargain and drive it into law.

SACRAMENTO, Calif. (KTXL) – Power outages across the region continue and not even stoplights can't escape their fury.

Adelaide Ford lives near Florin Road and she is one of tens of thousands of people without power after the winds battered homes and trees Tuesday night.

SAN RAMON, Calif. (AP) — Apple says it will roll out a new privacy control in the spring to prevent iPhone apps from secretly shadowing people. The delay in its anticipated rollout aims to placate Facebook and other digital services that depend on such data surveillance to help sell ads.

Although Apple didn't provide a specific date, the general timetable disclosed Thursday means a long-awaited feature known as App Tracking Transparency will be part of an iPhone software update likely to arrive in late March or some point in April.

Northern California communities clean up in aftermath of powerful winds