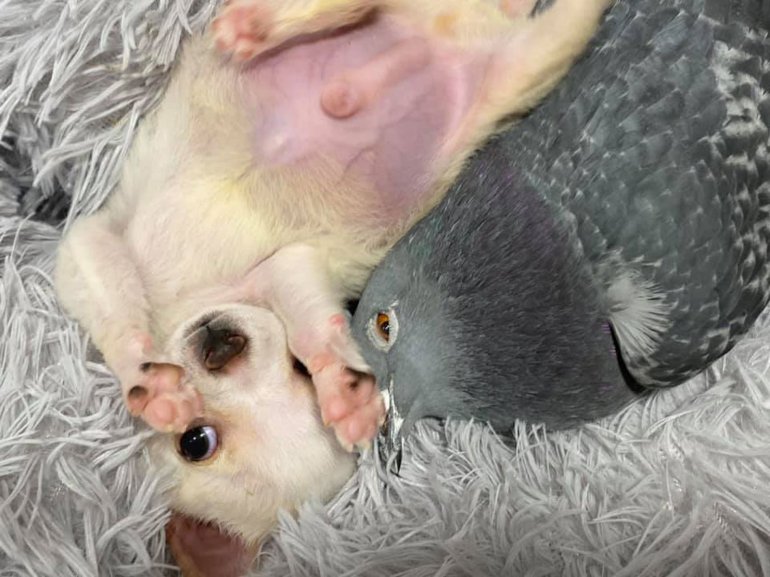 The two are an unlikely pair: Herman, a pigeon, suffered neurological damage more than a year ago. He can’t fly. Little Lundy, a newborn chihuahua puppy, can’t use his back legs.

But stick them together, and the two will snuggle up as though they were members of the same litter — or nest.

The two met through the Mia Foundation, a rescue organization in Rochester, New York, that rehabilitates animals with birth defects and physical deformities. Sue Rogers, the nonprofit’s founder, sends most of her rescues to foster homes around the US but keeps a few of them for school programs about bullying.

Their interspecies friendship has inspired scores of supporters to donate to the foundation. And the animals, Rogers said, make each other better.

Herman was found over a year ago in a car dealership parking lot, where he sat on the pavement, unmoving, for three whole days. Eventually his rescuers realized the poor pigeon couldn’t fly.

Neighboring wildlife rescues said he couldn’t be rehabilitated and would need to be euthanized, so Rogers took care of him herself. 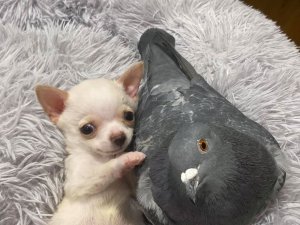 He now rests in a baby crib for some of the day, but she takes him outside daily to stimulate him.

Little Lundy, an infant chihuahua, is a new arrival. His breeders in South Carolina sent him to Rogers because he had trouble using his hind legs, a condition known as swimmers syndrome.

At just 6 ounces, he was small enough to fit in a shirt pocket. Rogers said she suspects Lundy’s difficulty walking is due to damage to his teeny spinal cord.

The two were bound to meet eventually. Rogers set them together while attending to Lundy and saw the way the two snuggled up almost immediately — Herman didn’t peck, and Lundy didn’t nibble.

Rogers snapped some pictures of their cuddles. The “oohs” and “ahhs” followed soon after.

People from every corner of the world flooded Rogers’ inbox with donations, messages of support and, naturally, pleas to adopt Lundy or the other cute pups in her care.

And the donations keep coming — the foundation raised $6,000 in two days, she said. That’s enough to cover the high-end cost of a veterinary surgery that many of her rescue animals require.

Lundy needs to get stronger to be adoptable

Herman will likely stay in Rogers’ care for the rest of his life. She’s hopeful Lundy stays strong and survives.

“With animals born with defects, there’s a chance we could lose them,” she said. “So we don’t want to make anyone really excited. But now I think we’ve gotten a thousand emails asking, ‘Please, don’t ever separate those two!'”

One of Lundy’s rescuers fell in love with him while traveling with him to Rochester, so he may already have a new home lined up. The question, then, is if Herman will ask to tag along too.

NASHVILLE, Tenn. (AP) — For months, actors, sports stars, musicians and other celebrities have been using their platforms to call for justice in the police shooting death of Breonna Taylor, including at Sunday's Emmy Awards. Her picture was used on the cover of O:The Oprah Magazine this year and even Beyoncé sent a letter to the Kentucky Attorney General asking for justice.

After a grand jury on Wednesday indicted one of the Kentucky police officers on criminal charges, but not for her death, many celebrities and sports stars decried the decision.

NEW YORK (AP) — The Walt Disney Co. has further postponed its next mega-movies from Marvel, including “Black Widow,” while also postponing Steven Spielberg's “West Side Story” a full year in the company's latest recalibration due to the pandemic.

Ten of Disney's top films shuffled release dates Wednesday, uprooting several of the company's major fall releases. The Scarlett Johansson Marvel movie “Black Widow,” last set for Nov. 6, heads to May 7 of next year. Instead of opening next month, Kenneth Branagh's murder mystery “Death on the Nile" moves to Dec. 18. That was the date set for “West Side Story,” but Spielberg's musical will instead debut in December 2021.

Simon & Schuster announced Wednesday that Woodward's book will be going into its fourth printing, with total books in print to be 1.3 million copies. Featuring 18 interviews with President Trump, including one in which he acknowledges in February the potential severity of the coronavirus, “Rage” has topped Amazon.com and other bestseller lists since coming out Sept. 15. The first week sales include hardcovers, audiobooks and e-books.

US experts vow ‘no cutting corners’ as vaccine tests expand

‘You are not listening:’ Fauci loses patience with Rand Paul in Senate COVID hearing

Bus-size asteroid to zoom by Earth, ducking below satellites

Lebanon asks world’s help ‘trying to rise from its rubble’

Judge: Eric Trump must testify in NY probe before election

Happiness class — free online — is most popular at Yale, especially during pandemic

Walmart to add 20,000 seasonal jobs. Here’s how you can apply

Tesla network outage locks some customers out of app, car

US experts vow ‘no cutting corners’ as vaccine tests expand

‘You are not listening:’ Fauci loses patience with Rand Paul in Senate COVID hearing

Bus-size asteroid to zoom by Earth, ducking below satellites

Lebanon asks world’s help ‘trying to rise from its rubble’