Slidell, La. – Many people dream of breaking a Guinness World Record, but Doug and Mary Beth Meyer actually did it. In fact they broke two world records with the world’s largest grapefruit: one for weight and one for circumference.

They had the help of their six grandchildren, the Louisiana Department of Agriculture – and some fairies. That’s right, the amazing fruit was grown just a few feet above a colorful Fairy Garden created by the couple’s grandchildren.

Many years ago the Meyers had purchased a grapefruit tree growing in a pot. They re-planted it in their backyard in Slidell and, lo and behold, it yielded an incredible citrus!

The record-breaking  fruit was first spotted by their grandson. 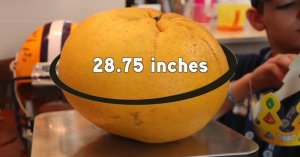 Doug was kidding at the time, but the fruit continued to grow, and so did his curiosity.

They soon looked up the record, which has been set by a Brazilian farmer in 2006. Next, they contacted Guinness and the Louisiana Department of Agriculture.

“There’s a process that Guinness has, you have to file an application with them and they have to approve your application before you can even make the attempt,” explains Doug, who did the work to get an application approved for two records: weight and circumference.

After months of tending to the tree and taking care of piles of paperwork, January 19th was the day of reckoning. The Meyers welcomed family, friends, the Louisiana Department of Agriculture, and authorities from Guinness to their home for measuring, weighing and determining the truth about their big fruit.

The verdict was declared: the Louisiana fruit was indeed a winner: At seven pounds, 14.6 ounces, and almost 29 inches around, it’s a double record holder!

But the greatest crop these two are cultivating is one you can’t taste or hold in your hands: it’s the memories built with their grandchildren, and the lessons being passed down.

“Just believe in magic,” says Mary Beth, who is a retired school teacher.

The Meyers plan to put together a book for their grandchildren about this scenario. It will be titled, “The Fairy Garden and the Grapefruit.”

SAN RAMON, Calif. (AP) — California power regulators are poised to reprimand Pacific Gas & Electric for continuing to neglect its electrical grid that has ignited a series of deadly wildfires in Northern California and could order the utility to do be more vigilant in the upcoming months of hot, windy weather.

The anticipated rebuke from the California Public Utilities Commission Thursday would serve as official notice to PG&E that it hasn’t been doing enough to reduce the risks posed by a combination of crumbling equipment and overgrown trees susceptible to touching or toppling into nearby power lines.

LONDON (AP) — Prince William and Prince Harry won’t walk side-by-side Saturday as they follow their grandfather’s coffin into the church ahead of Prince Philip’s funeral, minimizing the chances of any awkward moments between the brothers who are grappling with strained relations since Harry’s decision to step away from royal duties last year.

Buckingham Palace on Thursday released the broad outlines of the funeral program for Queen Elizabeth II's husband, who died April 9 at 99. The palace revealed that William and Harry’s cousin, Peter Phillips, will walk between the princes as they escort the coffin to St. George’s Chapel at Windsor Castle, west of London.

BROOKLYN CENTER, Minn. (AP) — Black community leaders and family members of Daunte Wright were calling for more serious charges against a white police officer in Wright's death, comparing her case to the murder charge brought against a Black officer who killed a white woman in nearby Minneapolis.

Former Brooklyn Center police Officer Kim Potter was charged with second-degree manslaughter in Sunday's shooting of Wright, a 20-year-old Black man, during a traffic stop. The former police chief in Brooklyn Center, a majority nonwhite suburb, said Potter mistakenly fired her handgun when she meant to use her Taser. Both the chief and Potter resigned Tuesday. Potter was due for her initial court appearance Thursday.

US stocks rise to records on more proof of economic recovery

Actually, Jennifer Lopez and Alex Rodriguez did break up

Body of officer killed at US Capitol returns home to Massachusetts

Californians ages 16 and up can now get COVID-19 vaccinations

A $1.2 billion loss for Delta, but recovery is on the radar

US jobless claims plunge to 576,000, lowest since pandemic

US stocks rise to records on more proof of economic recovery