After a Ku Klux Klan group in Missouri released a flyer that threatened to use ‘lethal force’ on Ferguson protesters, members of the hacker group Anonymous have declared ‘Cyber Warfare’ on the KKK.

In an interview with the River Front Times, the leader of the KKK group described Ferguson protesters as “the best recruiters since Obama,” and described them as terrorists, not protesters.

Just days before, a neighborhood in Fenton, Missouri woke up to find KKK flyers in their driveways offering neighborhood watch security.

The flyer released by the Ku Klux Klan directly addressed the protesters and wrote “You have awakened a sleeping giant,” and went on to add “We will use lethal force as provided under Missouri Law to defend ourselves.”

After KKK released this flyer, members of the worldwide hacker group released a YouTube video along with a written statement. “The aim of our operation is nothing more than Cyber Warfare,” read the group’s YouTube comment. “Anything you upload will be taken down, anything you use to promote the KKK will be shut down.”

Members of Anonymous started the Twitter account @OperationKKK to reveal the alleged identities of members of the KKK. As of Sunday night, the group claims to have identified 28 Missouri Klan members, posting their names and Facebook profiles alongside the hashtags of #OpKKK and #HoodsOff.

The hackers also took over @KuKluxKlanUSA on Sunday morning, after the account described Anonymous as “nothing but a bunch of wannabes.” The profile now reads “Under anon control as of 16 NOV 2014 09:11:47. You should’ve expected us.” 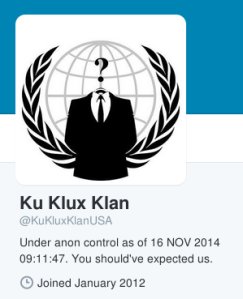 (KXAN) — As the U.S. marks the 48th anniversary of the landmark Supreme Court Roe v. Wade decision, debate over the legality and morality of abortion goes on. But the polarizing ruling has gained significant support among one surprising group.

King died at Cedars-Sinai Medical Center in Los Angeles, his production company, Ora Media, tweeted. No cause of death was given, but a spokesperson said Jan. 4 that King had COVID-19, had received supplemental oxygen and had been moved out of intensive care. His son Chance Armstrong also confirmed King’s death, CNN reported.