AMADOR COUNTY -- As the returns continue to pour in from primary election night, many voters in Amador County feel cheated.

The county ran out of ballots in nearly all of its precincts Tuesday night.

Dawn Santos is one of those voters who never misses an election. But on Tuesday she was left out.

"I can’t believe they didn’t print enough ballots," Santos said. "I mean, it’s like inviting 50 people over for dinner and only serving 20 pieces of chicken."

She was one of many Amador County voters turned away at her polling center because it had run out of ballots.

"We were cheated as voters but I also felt like that candidate we were supporting was cheated out of our vote," Santos said.

One of those candidates Santos supported was Robert Schell, who is running for superior court judge.

"We’re facing a crisis in legitimacy of the government all the time and people do think their vote doesn’t count," Schell said.

"We underestimated the turnout when we ordered ballots," said Kim Grady, who is in charge of elections in Amador County.

Grady admits they made a mistake in not ordering enough ballots. The county has nearly 22,000 registered voters. Grady wouldn’t say how many ballots the county ordered, or how many were mailed out.

But, historically, Amador County’s voter turnout is high. In the last two non-presidential elections, turnout there was 47 and 58 percent, compared to just 25 and 33 percent statewide.

"We have 28 days to finish an election, so it might take a little bit longer," Grady said.

On Wednesday, Grady and her staff spent the day copying people’s sample ballot votes onto real ballots. There weren’t enough legitimate ones available on election night.

But Schell and other candidates on the ballot say there’s no excuse for this type of mistake.

"Traditionally, this county turns out in a primary election," Schell said. "That was more than a huge oversight.”

Santos said, on a personal level, not being able to vote hurts. "It’s kind of un-American. That’s our right. Our right is to vote and they took that right away from us," she said.

The candidate for Judge Schell says he’d consider having the state invalidate the election. It would take a very serious demand for the state to consider a move like that.

See below for Grady's official statement, which was sent on election night: 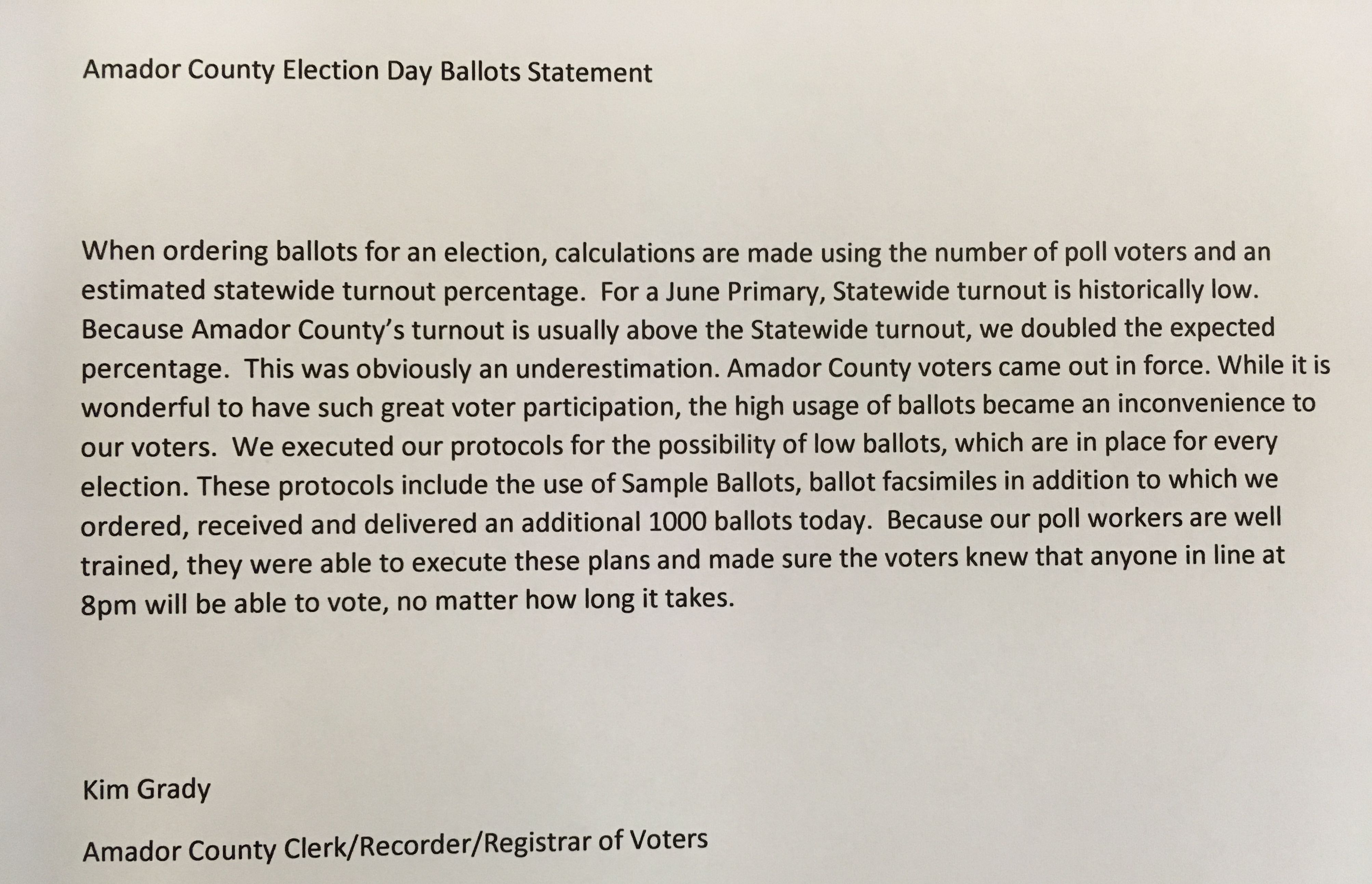 This is a developing story.

WATERFORD, Calif. (KTXL) -- Back in the spring, a Waterford teacher found a creative way to stay connected to his students while they were distance learning.

Now that they are back in the classroom, Phil Azevedo is bringing his artistic abilities to the blacktop.

SACRAMENTO, Calif. (KTXL) -- In the past five weeks, a local school board candidate said several of her campaign signs have been vandalized, some with racial slurs or other profanities.

"We lifted it up to try and save it. It had the N-word, black B-word and a few more N-words," explained Natomas Unified School Board candidate Ericka Harden. "Just a lot of hatred in the world and there's absolutely no reason to be like that."

SACRAMENTO, Calif. (KTXL) -- While the Red Flag Warnings continue into autumn, the recovery from some of the fires that burned during the summer is still taking place.

Cal Fire and the American Red Cross told FOX40 they still have their hands full dealing with the aftermath of fires that destroyed thousands of homes.