At least three people were hit by the gunfire Monday night in the area between North American and North Sutter streets.

A witness described seeing someone jump out of a car and open fire near North Sutter and Flora streets. It was along North Sutter Street, between Flora and Park streets, where police say they found a 19-year-old man who had been shot. He later died at a local hospital. 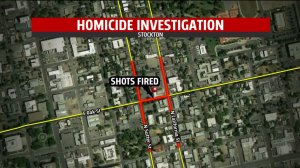 Clerks working at Cal Park Grocery and Liquor, located a block away, say one of the other two victims was a daily customer who had just checked out when the shooting began.

Gurnam Singh says he saw the customer with a 5-year-old boy who had been shot in the leg.

We've just learned from @StocktonPolice that a 19 year old man was killed in tonight's multiple shooting. He was found here on Sutter St., but did not survive after being taken to the hospital. A 5 yr old boy & a 28 year old man were also shot but are expected to survive. @FOX40 pic.twitter.com/OIfDYxduuM

The boy and the 28-year-old man were both injured but the police department says they are both expected to be OK.

Another block away from the store, at Park and North American streets, police had crime scene tape up, protecting an area where they’d put down nine evidence markers.

If you know anything about this incident, you’re asked to call Crime Stoppers.

Third part of this shooting scenario now roped off by @StocktonPolice… a block of Sutter Street where it intersects with Park. As of yet, no updated conditions on the confirmed 3 shooting victims. @FOX40 pic.twitter.com/ZlMyVE3UAl

Stay with FOX40 for more updates.

ROSEVILLE, Calif. (KTXL) -- The sound of engines, the smell of burnt rubber and the noise of fans cheering returned to Roseville Saturday night as people were allowed to attend stock car racing in person.

For many, it was an escape, and many are hoping it’s only the start of what is to come.

SACRAMENTO, Calif. (KTXL) -- With Ramadan set to begin Monday, a local nonprofit is helping those in need.

Sacramento man has heart attack while skiing, another while recovering

SACRAMENTO, Calif. (KTXL) -- A Sacramento man is counting his blessings after surviving a heart attack on top of a mountain and spending a majority of the pandemic trying to recover.

Peggy and Jim Hayes have been married for 20 years. They say there's never a shortage of adventures in their household.

Thousands rally in Serbia to protect the environment

Toddler out of medical coma after Chicago road rage shooting

Sacramento man has heart attack while skiing, another while recovering

VIDEO: One dead, at least 7 injured in overnight storm that ripped through St. Landry Parish