Updated January 4, 2019: The Ceres Police Department arrested 42-year-old Joe Patrick Sandoval for felony hit-and-run. He was arrested Friday morning after his family called authorities and notified them that the suspect had returned home and needed medical attention.

CERES — Ceres officers are searching for a driver suspected of hitting another vehicle head-on, injuring five other people.

According to the Ceres Police Department, the crash occurred in the area of Mitchell and Service roads Thursday night.

Following the head-on crash, the driver responsible ran from his car and was last seen heading east on Service Road.

Hit and run driver sends two kids to the hospital by air ambulance. #Ceres PD searching for the man who fled on foot. Crash happened near Service/Mitchell Roads. pic.twitter.com/JFXg6V733s

He had an apparent gash in his forehead and was covered in blood down to his torso. Witnesses say he was staggering from his injuries.

The Ceres Police Department says a 34-year-old female driver and two male adults in the other car suffered minor to moderate injuries.

Two brothers — ages 8 and 9 — were flown to UC Davis Medical for serious injuries.

The police department reports the Hispanic man they are searching for is 6 feet 1 inch tall and 180 pounds. He was wearing a white T-shirt, white shoes, jeans and a jacket. 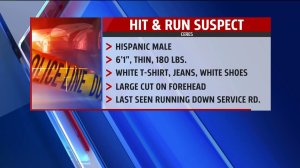 Stay with FOX40 for more updates.

ROCKLIN, Calif. (KTXL) -- Health officials in Placer, Yuba and Sutter counties are warning businesses that they may soon fall under the state’s watch list and new guidelines.

The Edible Schoolyard Project and the PDL Youth Foundation gave away 150 boxes full of fresh organic fruits and veggies.