MERCED COUNTY — A family is desperate to find a Modesto woman who went missing on Monday.

Devenport-Tull was last seen near Childs and Cunningham roads in Merced County. Her car was found crashed in the area but she was nowhere to be found. Drawings and papers were found nearby.

According to Devenport-Tull’s father, his daughter has bipolar disorder. He says she has not taken her medication for about six months because a pastor and his wife told her that pills lead to demons.

Her father also told FOX40 that Devenport-Tull was taken against her will about 10 years ago in Southern California. Three years after she had returned she was diagnosed as bipolar, prescribed medication and was considered high functioning until she stopped taking her medication.

Devenport-Tull’s mother, husband and friends are searching for her.

Devenport-Tull is described as a white woman, standing about 5-feet-8-inches tall with brown hair and blue eyes. If you see or locate her, do not contact her. Instead, call the Merced County Sheriff’s Office at (209) 385-7445.

A reward of $100,000 is being offered for the safe return of Jamie Devenport-Tull. 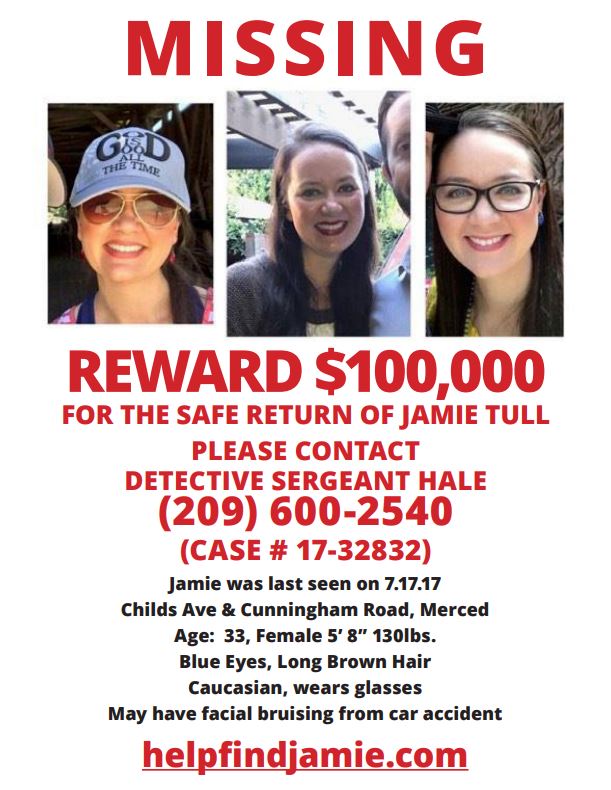 For runners, a pair of affordable compression socks can be one of the most important pieces of gear.

What are the best grooming products for cats and …

Check out these 12 grooming products to spruce up your cat or dog at home.

Still have Beatlemania? Check out these fab products …

Whether it’s wall art, vinyl albums, a t-shirt or some other memorabilia, you can embrace and proclaim your undying Beatlemania with these items.

Turlock PD to have extra officers for Super Bowl …

Community Youth Leader to be guest at State of the …

‘Enough is enough’: Victims of man suspected of child …

10-year-old shot and killed during a ‘dispute among …

10-year-old dies after being shot in a ‘dispute among …

One person pulled from structure fire in Carmichael

Another winter storm this weekend

Mother of fentanyl victim to attend State of the …

Turlock PD to have extra officers for Super Bowl …