SACRAMENTO COUNTY — Family says Vijay Kumar’s locked car was found parked at the aquatic center near Lake Natoma but he hasn’t been seen or heard from since.

“It just does not seem like he would do anything drastic,” said Kumar’s wife, Madhur. 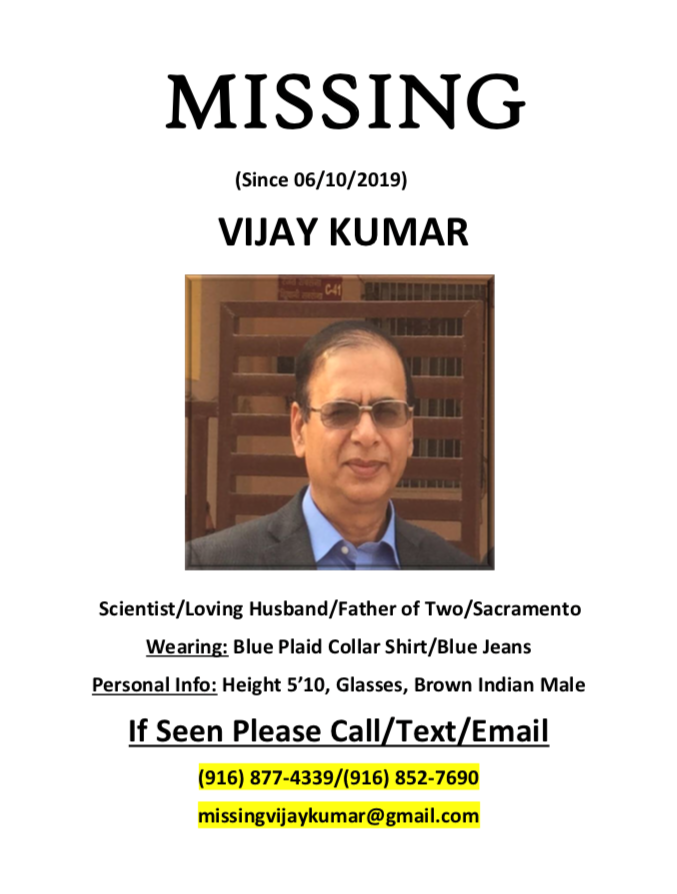 “It was shocking. I was at work, actually, and I get a phone call from my mom. She’s like, ‘Oh, dad hasn’t come home yet,’” said Jay Kumar.

Madhur said she and her husband went to an orientation for their youngest son last Monday before they parted ways for the day. His oldest son, Jay, was the last person to hear from his father.

The family said they immediately knew something was wrong when Vijay did not return home.

“When he’s running late, there’s always he’ll call and says, ‘I’m going to be late today.’ And so, I didn’t hear that from him,” Madhur Kumar said. “He was not a person who would shun his responsibilities. He was not impulsive. Very stable, well-balanced scientist.”

Family and friends in the Gold River and Folsom communities spent their Father’s Day searching for the missing dad.

“We had a ton of people come out and support us. It was over 100 people,” Jay Kumar said.

While the family is holding onto hope, they’re left waiting for answers that could lead them one step closer to finding Vijay.

“I know this probably isn’t voluntary, like, there’s no way. But if he is somehow listening to this, somehow, I just want him to come home,” Jay said.

The Sacramento County Sheriff’s Office confirmed they received a missing persons report. They said they don’t believe his disappearance is suspicious at this time.

If you happen to know where Vijay may be, you’re asked to contact deputies.

(KTXL) -- President Donald Trump signed multiple executive orders Saturday, one of which extends unemployment benefits for those out of work during the pandemic.

It comes after negotiations stalled on Capitol Hill, and the extra $600 relief checks expired.

TRACY, Calif. (KTXL) -- The stakes are high at Stars Casino in Tracy and the business is going all-in.

“We went through our reserves rather quickly because without income and fixed expenses, it’s hard to survive,” said Stars Casino CEO Emmanuel Macalino.

LAKEPORT, Calif. (KTXL) -- The Lake County Sheriff’s Office says they found one man dead at a crash site after being notified of an overdue aircraft.

He was identified as 89-year-old Matthew Herron of San Rafael.

Stimulus check update: Why we’re no closer to a second $1,200 payment

‘Who polices the police?’: Legal observer says Sacramento police fired projectile at his face during protest