Authorities in San Joaquin and Stanislaus counties reported a string of bank robberies Monday and it appears one suspect is responsible.

The first robbery happened at a Bank of Stockton location on Dale Road in Modesto Monday morning around 10:40.

Less than an hour later in Ripon, the Oak Valley Community Bank on North Wilma Avenue reported a robbery.

Around 12:20 p.m., it appears the same suspect targeted a Bank of Stockton branch in Manteca on North Main Street.

Each time the robber was captured by surveillance cameras wearing a German-style motorcycle helmet, a fake red beard, and red and black rubber gardening gloves.

No weapon was seen at any of the branches but the red-bearded bandit passed notes demanding money.

None of the banks involved have any kind of barrier encasing the teller areas.

Police posts of the surveillance pictures on social media have many in the public speculating that although the criminal tried to present as a man, they may be female. People have pointed to the robber’s well-shaped eyebrows. It's something investigators are questioning as well.

The robber was seen leaving in an older, black Dodge Neon sedan. 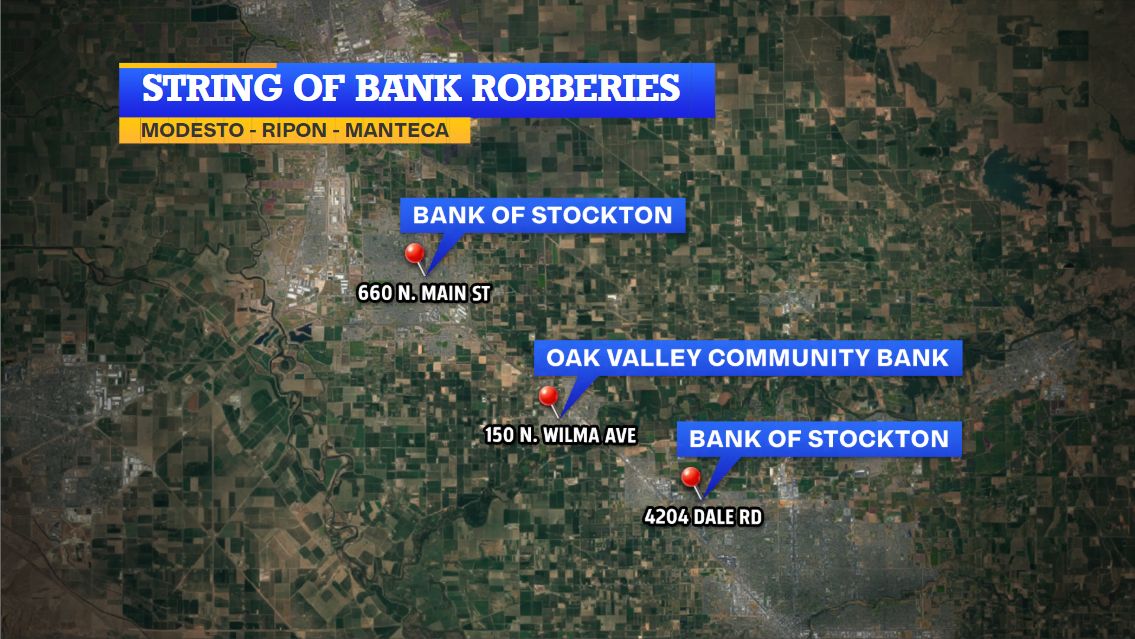 Thieves targeted an apartment complex in Elk Grove Saturday morning leaving behind broken windows and shattered glass. The security gate requires a code or pass to get inside the StoneLake Apartment Homes, but that didn’t stop the thieves.

“My brother was using my parking spot because there is not a lot of parking there, and in the morning, he had work,” resident Matthew Chetner told FOX40. “So, he went down and he’s like, “Hey, my car got broken into.’”

STOCKTON, Calif. (KTXL) -- Stockton police said someone shot at a man and woman while they were driving early Saturday morning. The man died from his injuries.

Police spokesman Joe Silva told FOX40 the shooting happened around 1:30 a.m. and resulted in the driver swerving into a building.

Parolee at large arrested after high-speed chase through Woodland

Just before 9 p.m., officers tried to pull over a vehicle with 25-year-old parolee at large Joseph Gonzalez behind the wheel, according to the Woodland Police Department.