EAST SACRAMENTO -- A local brewery is seeing backlash and support after the owner wrote a controversial Facebook post about Saturday's Women's March.

Daniel Murphy, owner of East Sac's Twelve Rounds Brewing Company, said he's disgusted by those in support of the march. He called politicians at the event pieces of garbage.

In previous posts, Murphy has targeted immigrants and the LGBTQ community.

It's what led Matt Nurge, co-owner of Midtown's Red Rabbit to this decision.

"We're going to stop serving the product, and we essentially just said we'd like to dissolve our relationship with Twelve Rounds."

Up until Tuesday, Red Rabbit owned 9 percent of Twelve Rounds and regularly served the brewery's beer.

"Those philosophies don't align with ours at all, quite frankly, a lot of them are kind of the opposite," said Nurge.

While many on social media said they don't accept the apology, Murphy still has his fair share of supporters. 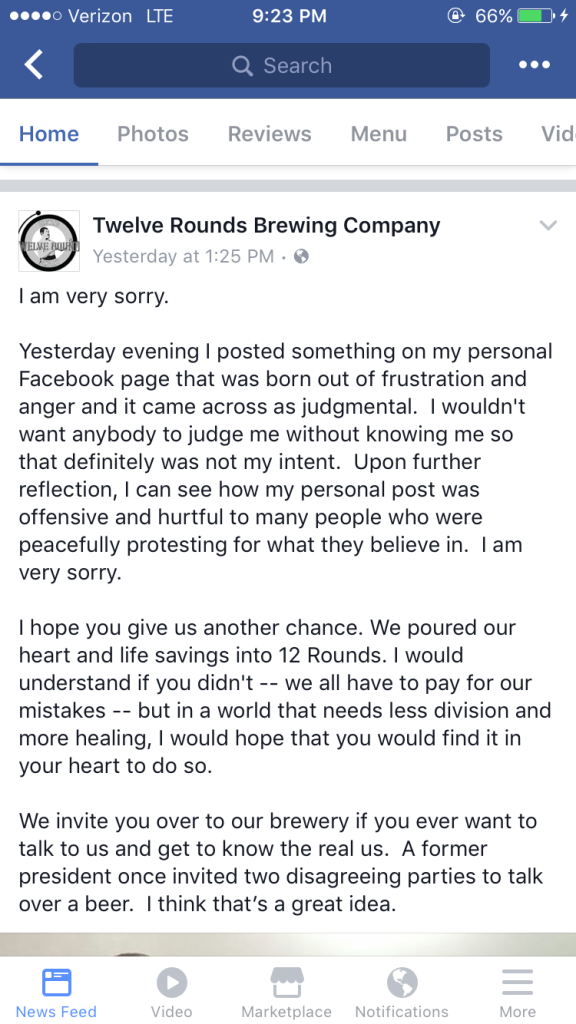 "To send a business out of work, we don't think that's such a good idea, so we're here to support this business and show everybody has a right to their opinion," said Adam Ellison with the Young Republican National Federation.

Members of the group spent the evening at Twelve Rounds. Ellison said the group wasn't there to validate any comments but rather to support free speech.

"Kind of a shock to us to see that so many on the left were rather intolerant when it comes to someone else's opinion," he said.

Ellison called Red Rabbit's move to sever ties with the brewery a big mistake. He's confident in the business bouncing back from this controversy.

"I don't think anyone is concerned, this is probably a huge boost in business for Twelve Rounds," he said.

Murphy wasn't at Twelve Rounds when FOX40 visited Wednesday night. We spoke to Murphy's wife for comment on the situation. She said she and her husband aren't speaking to the media at this time.

WATERFORD, Calif. (KTXL) -- Back in the spring, a Waterford teacher found a creative way to stay connected to his students while they were distance learning.

Now that they are back in the classroom, Phil Azevedo is bringing his artistic abilities to the blacktop.

SACRAMENTO, Calif. (KTXL) -- In the past five weeks, a local school board candidate said several of her campaign signs have been vandalized, some with racial slurs or other profanities.

"We lifted it up to try and save it. It had the N-word, black B-word and a few more N-words," explained Natomas Unified School Board candidate Ericka Harden. "Just a lot of hatred in the world and there's absolutely no reason to be like that."

SACRAMENTO, Calif. (KTXL) -- While the Red Flag Warnings continue into autumn, the recovery from some of the fires that burned during the summer is still taking place.

Cal Fire and the American Red Cross told FOX40 they still have their hands full dealing with the aftermath of fires that destroyed thousands of homes.

Colorado firefighters to homeowners: ‘If this note finds you we must have done something right’