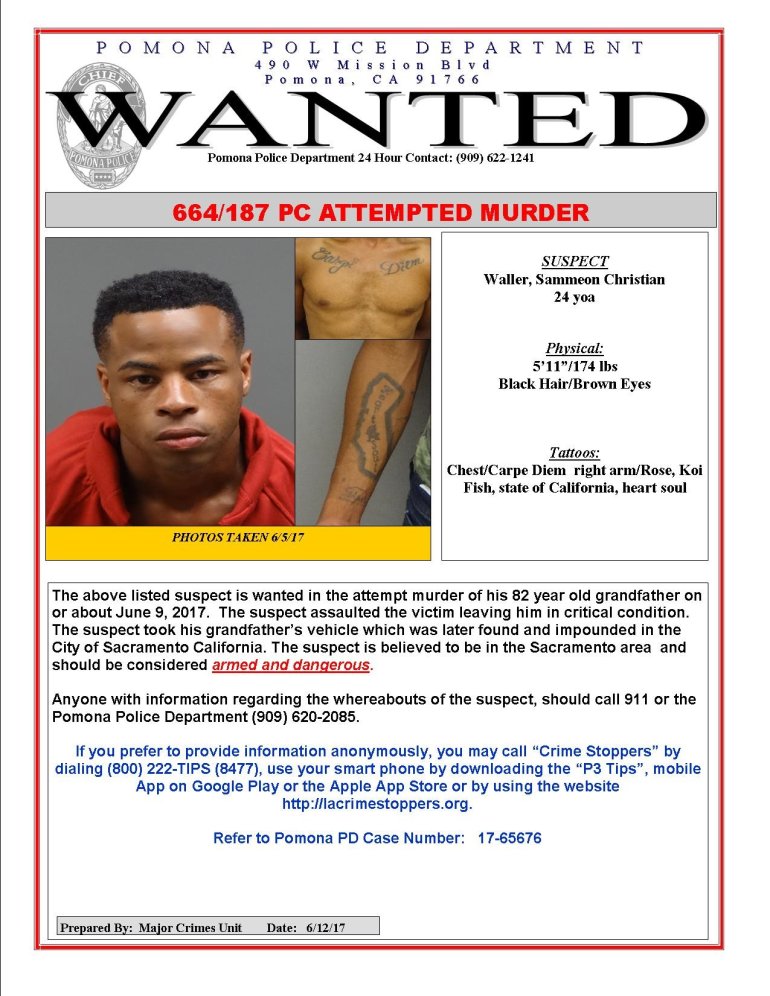 SACRAMENTO — A 25-year-old man wanted in connection to an attempted murder in Pomona was found in Sacramento Saturday morning, police confirmed in a statement.

Authorities in Pomona got word Saturday that the suspect, Sammeon Christian Waller, was spotted in a Sacramento neighborhood. Police later located Waller and took him into custody.

Waller is accused of assaulting his 82-year-old grandfather, Robert McPherson, on June 9, at his Pomona home, according to police.

When police found McPherson, he was on the ground bleeding and suffering from major head trauma. He was then transported to an area hospital in extremely critical condition.

McPherson had an active restraining order against his grandson at the time of the attack.

Waller allegedly took his grandfather’s vehicle after the attack. The vehicle, a 2003 silver Honda Odyssey, was later found and impounded in Sacramento, police said.

Waller is currently being held by Sacramento police on an arrest warrant. According to Pomona police, arrangements are being made to transport the man back to Los Angeles County.

Some nail salons in Sacramento County took Dr. Mark Ghaly's announcement as a green light and resumed operations inside their shops.

GRASS VALLEY, Calif. (KTXL) -- On the first night back open for business, the manager of Prosperity Lanes in Grass Valley said she did not exactly have the enthusiasm to spare, at least not yet.

"Trying not to get too excited about it because I just don't know if it's… Just having a hard time believing it's actually going to happen," said manager Carrie Lahr. "Tomorrow morning I'll be like, OK, yes, we're actually opening the doors again, OK."

NASA sending first woman, next man to the moon in 2024

Late-stage study of first single-shot vaccine begins in US

India, China: Some progress in military talks on border spat

Maine to use ranked-choice voting for presidential election

Times of sun and clouds Precip: 10%

Late-stage study of first single-shot vaccine begins in US

NASA sending first woman, next man to the moon in 2024