SACRAMENTO, Calif. (KTXL) — A Sacramento man says he’s still unsure why a trip to the grocery store ended with him in the hospital and his dog at the vet.

“I don’t train her to harm anybody. She helps me get around and she knows when I might have a seizure,” said Kevin Cole.

On Wednesday, however, Cole thought that he would never see his support dog, Nikki, again.

Sacramento police say an officer was responding to reports of a man, identified as Cole, causing a disturbance and refusing to leave the area outside of Safeway in midtown.

They say a physical altercation occurred between Cole and the officer when Cole’s dog bit the officer in the arm. 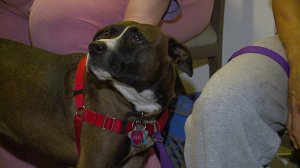 “The dog was physically attacking one of our officers. Additional officers arrived on scene and saw this, and fired a round toward that dog,” officer Sabrina Briggs said. “Shrapnel from that round struck two individuals.”

Officials say Nikki, Cole and a security guard were all struck from the bullet’s ricochet.

But Cole says that’s not exactly what happened on Wednesday.

He says he initially decided to stop inside a Safeway to buy groceries and withdraw money from an ATM after leaving a nearby doctor’s office.

“I left the store and security came right up to me and told me I had to leave the property,” Cole said. “I was gathering my groceries just to get myself mobile.”

Cole says he has an immune disorder that slows him down, which is why he was slow to get on the light rail.

“I was not moving fast enough for the officer,” Cole said. “Then he turned around and said, ‘I’m placing you under arrest. Your dog is going to impound, the shelter or whatever, and you’re going to jail’.”

Then, while on the ground, he says he heard a gunshot.

“Pow, a gun goes off in my face and her, and that’s about it,” Cole said. “I’m bleeding out. I don’t know how much blood is flowing. I can’t see, and she ran away. She was inside Safeway.”

He was praying the entire time hat his dog was safe after what he describes as a scary ordeal.

“We got shot for going grocery shopping in Safeway and I don’t understand why,” Cole said.

Sacramento police said they have nothing to add at this time after being informed that FOX40 would be speaking to Cole.

Per Sacramento’s policy, all available video and audio will be released within 30 days of the incident.

SACRAMENTO, Calif. (KTXL) — SMUD and PG&E crews continue to work towards restoring power as tens of thousands of people are waking up in the dark Thursday.

(KTXL) – With his vehicle stuck in the snow along Donner Pass Road, Jeff Kramer turned to the heroes of Soda Springs.

"The community came out and helped me out,” Kramer said.

SACRAMENTO, Calif. (KTXL) -- A homeless man was injured after a car crashed into a commercial strip mall Wednesday night.

The Sacramento Fire Department says the man was injured when the crash damaged a vacant storefront and the adjacent business on Stockton Boulevard.

‘Immunity bubbles’? What you shouldn’t do after getting the COVID vaccine