Around 11:30 a.m. Saturday, authorities were called to the West Lane area for a report of a man with a baseball bat who was acting erratically. 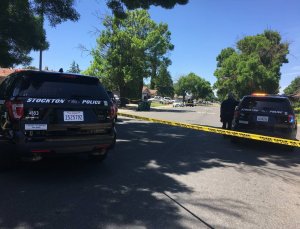 Police said when they located the man, he didn’t follow orders to drop the bat.

“When our officers located him here on Castle Oaks Drive, they ordered the man to drop the baseball bat at which time the man refused to comply with the officers orders and actually advanced in the direction of the officers, swinging the baseball bat,” Stockton Police Spokesman Joe Silva said.

One of the officers fired his gun multiple times, striking the man.

“Me and my mom were cooking but my step dad came from the back room and he was like, ‘I just heard bang, bang, bang,'” Athena Vargas said.

The man was transported to a nearby hospital where he remains in critical condition.

“It’s really scary not knowing… like how violent actions can just happen so close to home,” Vargas expressed.

According to Stockton Police, the officers involved in the shooting are “OK.”

The names of the officers involved and the man who was shot have not yet been released.

“We have invoked a countywide protocol investigation so that we can have different teams from the District Attorney’s Office [and] the Department of Justice come out to the scene to investigate the events that led up to this officer-involved shooting,” Silva explained.

As part of that protocol, investigators will also review body camera footage which will be released at a later date.

SPD is investigating an officer-involved-shooting in the area of Castle Oaks Dr/Marlboro Ct. The involved officers are ok. The suspect is currently at the hospital, unknown condition. pic.twitter.com/GbcCV695aP

An investigation concluded that Jefferson-Henkel died by suicide, but her mother, Kim Jefferson, says the physical evidence makes her believe someone may have taken her daughter’s life.

SACRAMENTO, Calif. (KTXL) -- Oak Park Brewing Company in Sacramento is one of nearly a thousand craft breweries across the U.S. releasing a new beer to raise funds and awareness to combat systemic injustice.

The brew, an imperial stout, is called Black is Beautiful and will help raise money for local organizations like the I Am Sac Foundation.

There were several themes such as Route 66, movies and derbies.

‘I beg them’: Still-unemployed workers plead for Congress to extend federal $600 benefit

Disney World to reopen as coronavirus cases surge in Florida