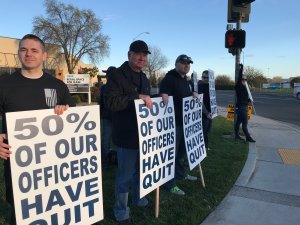 Officers and volunteers took to town center plaza asking for the community to get involved because the police officers association says the department is struggling.

The union says because of the huge pay disparity, 50 percent of veteran officers has left the department for better paying jobs,

"Everyone that has left wanted to work in West Sacramento," Barreiro said. "If you can walk across the bridge and make 20 percent more, that makes a big difference for somebody’s family."

"We can’t do as much of that proactive policing, combatting gangs, combatting drugs, combatting prostitution, all those sorts of things that take a proactive approach, when we are just reacting to 911 calls," he said.

The police officers association say they need a 16.8 percent raise, which they say would just put them around average for this area. They say the city has countered with a one percent raise.

“It is the longstanding practice of the City to not conduct collective bargaining negotiations in the news media. The fact that one party has published an open letter does not change the status of ongoing negotiations. We value the contributions of the Police Department and look forward to a timely resolution.”

The police officers association says they are only reaching out to media and the public because they haven’t received a raise in 10 years and worked behind closed doors long enough for a solution.

"We wouldn’t be bringing this to the public if it wasn’t critical," Barreiro said. "The community deserves to know that the city is putting them at risk. We aren’t asking for much, we are asking for the going rate for a police officer in this area. City Hall thinks they can have a discount police department and it doesn’t work."

SACRAMENTO, Calif. (KTXL) -- Protests are continuing for the fourth day in Sacramento after a grand jury’s decision to not directly charge any officers in the killing of a Black medical worker in her Kentucky home.

Only one of the three officers involved will face charges which are related to endangering the lives of others after firing his gun.