Samantha Green, 23, made her first appearance in court on Wednesday afternoon.

Green was arrested Saturday and charged with murder in the death of her 20-day-old baby boy, Justice Rees.

However, after a careful four hour review of evidence, the Yolo County District Attorney’s Office filed a criminal complaint Wednesday, lessening the charges. In the documents, prosecutors charge Samantha Green with involuntary manslaughter and child endangerment. The complaint states that Green killed her baby “without malice, in the commission of a lawful act which might produce death, in an unlawful matter…” 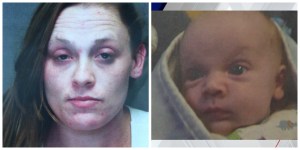 She and her son were first reported missing Monday, Feb. 23 along the Sacramento River at Ridge Cut Slough near Knights Landing. Investigators found baby Justice dead at that location the next day.

Green was initially booked into jail for murder.

The coroner’s autopsy revealed no obvious physical injuries or signs of abuse on Baby Justice. However, a spokesperson told FOX40 Thursday hypothermia or drowning are both possibilities.

Yolo County Sheriff Ed Prieto told the media Thursday that Green and her son were the only two people in the vehicle that traveled to the slough. He added that investigators have not connected anyone else to the crime scene.

Green is being held without bail. If she is convicted, the 23-year-old could face up to a year in jail with probation, or up to 12 years in state prison if found guilty on all charges.

According to police, they responded to a report of a dead person around 1:09 p.m. on Florin Road near 29th Street.

SACRAMENTO, Calif. (AP) — California Gov. Gavin Newsom wants to use a sliver of the state's massive budget surplus to give poor people money each month with no rules on how they spend it.

Newsom's budget proposal, announced Friday, includes $35 million over five years to pay for “universal basic income pilot programs.” The idea is to give poor people money each month to help ease the stresses of poverty that can make it harder to find full-time jobs and stay healthy.

HOLIDAY, Fla. (WFLA) – A man and his dog are both recovering after an alligator grabbed his beloved pet during a walk this week in Holiday, Florida and he jumped into action to fight the creature off.

Mike McCoy said he and his friend walk their dogs together every day. During their walk Tuesday morning, he said, a gator grabbed his 8-month-old dog Jake.

Noah, Olivia once again top ranking of 100 most popular baby names in California

House to vote soon on bills to protect Capitol after Jan. 6

US sending new aid to Palestinians as conflict intensifies

Petition calling for Tokyo Olympics to be canceled amid pandemic gathers 350,000 signatures

San Francisco streetcars are back but no cable cars yet