SACRAMENTO – –  A Sacramento man was arrested early Saturday morning after two patrol officers attempted to stop a suspicious vehicle for an equipment violation.

Around 3:45 a.m., Sacramento Police Department patrol officers in Del Paso Heights spotted a vehicle driving in the area of Helena and Taft Street with two softball size holes in the windshield. 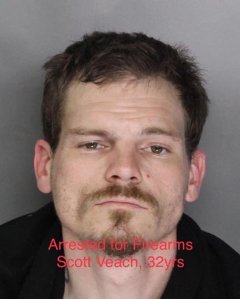 Officers found the vehicle parked in a residential neighborhood with one of the two male occupants missing. One officer detained the driver while the other officer began searching nearby homes for the passenger.

The officer heard noises coming from a driveway of a residence that sounded like a vehicle was being broke into. As the officer approached, the suspect, identified as 32-year-old Scott Veach of Sacramento, began to flee on foot.

The suspect fell and was ultimately detained by the officer.

After officers checked the driveway where the suspect was seen running from, they located a sawed-off shotgun under the bumper of a vehicle. Officers determined that Veach had placed the firearm under the vehicle before fleeing. 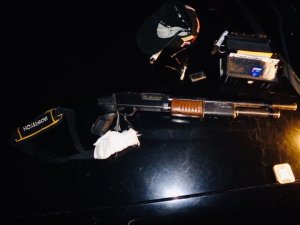 Veach was arrested and booked into the Sacramento County Jail on multiple firearm charges.

LASSEN COUNTY, Calif. (KTXL) -- A man suspected of kidnapping a woman in Lassen County was arrested after an hourslong standoff with police.

Officials with the Lassen County Sheriff's Office have been searching for 41-year-old Maitland Carpenter after they say he left with Dorothie Janaybean Crosby Monday, holding her against her will. Crosby was later found in Susanville Monday night.

In recent weeks, U.S. Immigration and Customs Enforcement has issued ‘administrative subpoenas’ — signed by an immigration official, not a judge — to state and local law enforcement agencies in Colorado, Connecticut, New York, Oregon and California.

MICHOACAN, Mexico – A 12-year-old boy left his puppy outside a shelter with a stuffed animal and a touching note: He wanted to spare him the wrath of his abusive father.

The boy, who identified himself as Andrés, left the pit bull puppy at a shelter in the Mexican state of Michoacán on Feb. 13. A dog rescue group shared his story on its Facebook page.

Officials searching for person of interest in Rancho Cordova homicide