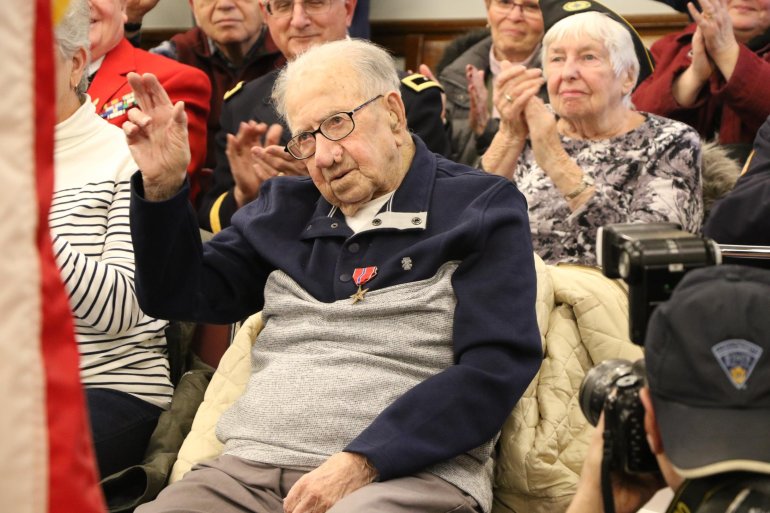 (CNN) — A 103-year-old World War II veteran is finally being honored for his time in the military — 75 years later.

Peter Fantasia, of Somerville, Massachusetts, received eight medals including the Bronze Star, Good Conduct Medal, and American Defense Service Medal. US Representative Seth Moulton presented him with the medals at a special ceremony on Monday.

Fantasia served with the Lima Company, of the 3rd Battalion, of the 104th Regiment of the 26th Infantry Division as a U.S. Army medic, according to CNN affiliate WHDH.

Fantasia was captured in Rodalbe, France, in 1944 while tending to a wounded sergeant and lieutenant in a foxhole and was held as a prisoner of war until he was liberated by Russian forces on April 28, 1945.

It took so long for Fantasia to get home that he didn’t seek after his medals.

“God has been good. I don’t know what to say,” Fantasia told WHDH.

He expressed his gratitude for his comrades and said that they were with him in spirit.

“He is a true example to the rest of the country and the community what American heroism is all about,” Congressman Moulton said.

WASHINGTON (AP) — The Democratic-led House is poised to pass a bill that would enshrine LGBTQ protections in the nation's labor and civil rights laws, a top priority of President Joe Biden, though the legislation faces an uphill battle in the Senate.

The Equality Act amends existing civil rights law to explicitly include sexual orientation and gender identification as protected characteristics. The protections would extend to employment, housing, loan applications, education, public accommodations and other areas. Supporters say the law before the House on Thursday is long overdue and would ensure that every person is treated equally under the law.

NEW YORK (AP) — February is usually the peak of flu season, with doctors' offices and hospitals packed with suffering patients. But not this year.

Flu has virtually disappeared from the U.S., with reports coming in at far lower levels than anything seen in decades.

NEW YORK (NewsNation Now) — A new coronavirus variant that could be more transmissible and intractable than the traditional strain is on the rise in New York City, researchers said on Wednesday.

Two studies — one from Columbia University and another from the California Institute of Technology — identified the new variant as B.1.526. Outside experts have reviewed neither study.

CDC report: 68% of people who exercised indoors at one Chicago gym contracted COVID-19