(CNN) — A driver was arrested in Arizona after he was found with meth worth more than $1.9 million in plain sight during a traffic stop, authorities said. 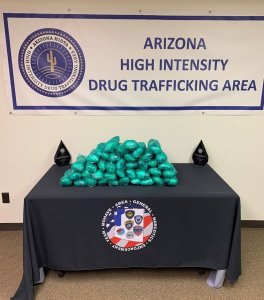 Authorities conducted the traffic stop on Interstate 40 in Kingman. Tellez-Nava was the sole occupant of the vehicle, the sheriff’s office said.

Detectives saw bundles of methamphetamine in plain view and arrested him on scene, authorities said.

“A further search of the vehicle resulted in three large (boxes) containing a total of 43 pounds of methamphetamine with an estimated street value of over 1.9 million dollars,” the Mohave County Sheriff’s Office said in a written statement.

Tellez-Nava was arrested and booked without incident. Information on his attorney was not listed.

Stocks moved higher on Wall Street Tuesday, steadying themselves a day after tumbling amid a raft of worries about the pandemic and governments’ response to it.

TAMPA, Fla. (WFLA)— You are about to have fewer locations where you can redeem all of those 20-percent off coupons that come in the mail from Bed Bath & Beyond. The home goods retailer has named the first batch of the approximately 200 stores it plans to close over the next two years.

USA Today first obtained a list of 63 stores the retailer plans to close by the end of 2020. The closures are spread across 28 states.

"I am going from kid to kid. 'You need to be on Zoom.' 'You're supposed to be doing this work.' 'You need a snack,'" said the mother of a fifth-grade student and a high school student. "It is a full-time job."

Romney OKs voting on court nominee, all but assures approval