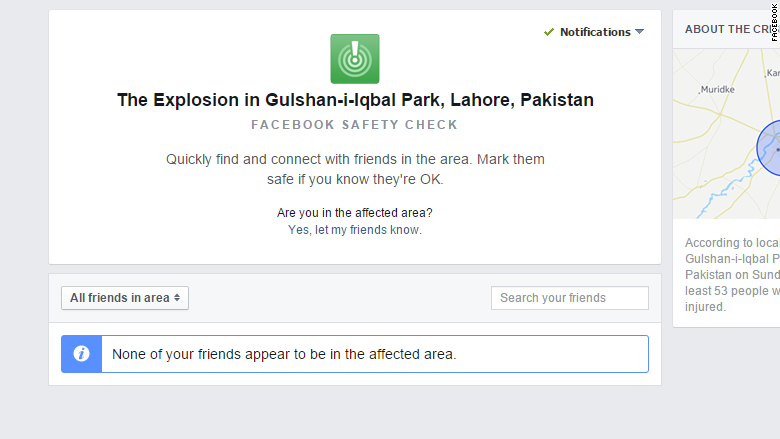 NEW YORK (CNNMoney) — Facebook activated its Safety Check after a suicide bomber in Pakistan left scores dead. But the feature malfunctioned, prompting users thousands of miles from the blast to tell friends they were safe.

Social media was flooded with confused Facebook users who’d received a notification Sunday morning reading: “Are you OK? It looks like you’re in the area affected by The Explosion in Gulshan-i-Iqbal Park, Lahore, Pakistan. Let your friends know that you’re safe.”

It was unclear how widespread the issue was, although it appeared to primarily affect users in the U.S. and UK.

“Unfortunately, many people not affected by the crisis [in Pakistan] received a notification asking if they were OK,” a Facebook statement read. “This kind of bug is counter to the product’s intent.”

Facebook said it had “worked quickly to resolve the issue.”

.@facebook clearly having some trouble with its safety check system, as i'm currently sat in West London #pakistan pic.twitter.com/w0BwSzTMah

Facebook first launched its Safety Check feature in 2014 for people to mark themselves or others as “Safe,” “Not in the area,” or “Unsafe” following natural disasters. The terrorist attacks in Paris last November were the first time the feature was used after a man-made disaster. Facebook says it’s still testing the feature for that use.

Facebook says that in 2015 more than 950 million people received a notification that a friend was safe.

There are better ways to ask a guy currently in Montana why he hasn't logged in to Facebook for a long time. pic.twitter.com/sRpaQflWrt

KANAB, Utah (KDVR) — New research released Monday from the Bureau of Land Management in Utah indicates that tyrannosaur dinosaurs may not have been solitary predators, as in the movies, but social carnivores, similar to wolves.

The research is based on a fossil site inside the Grand Staircase-Escalante National Monument called the "Rainbows and Unicorns Quarry."

IOWA CITY, Iowa (AP) — An insurer for the City of Cedar Rapids will pay $8 million to a Black motorist who was paralyzed after a white police officer shot him during a 2016 traffic stop, the city announced Monday.

The payout will settle a long-running lawsuit brought by Jerime Mitchell, 42, over a shooting that had sparked protests and exposed tensions between Black residents and authorities in Iowa’s second largest city.

WASHINGTON (AP) — Prisoners at the Guantanamo Bay detention center can begin getting the COVID-19 vaccine as soon as Monday, a senior defense official told The Associated Press, months after a plan to inoculate them was scuttled over outrage that many Americans weren’t eligible to receive the shots.

The new timing coincides with President Joe Biden’s deadline for states to make the vaccines more widely available across the U.S. Beginning Monday, anyone 16 and older qualifies to sign up and get in a virtual line to be vaccinated.

No, vaccine side effects don’t tell you how well your immune system will protect you from COVID-19

Mendocino café offers 50% discount to those who trash their masks