The intense manhunt for the two brothers wanted for the Charlie Hebdo magazine massacre focused Thursday on northern France’s Picardy region, where helicopters swarmed overhead and heavily armed officers canvassed the countryside and forests in search of the killers.

Authorities have not said definitively they know where Cherif Kouachi, 32, and Said Kouachi, 34, are, or where they might be going. Still, their actions — taken after a gas station attendant reportedly told police the armed brothers threatened him near Villers-Cotterets in Picardy, stole gas and food, then drove off late Thursday morning — speak for themselves.

About 10 kilometers (6 miles) from the gas station, police blocked a rural country road leading to the French village of Longpont. Authorities have not commented in any detail, but pictures showed heavily armed police officers with shields and helmets in the blocked-off area.

Prime Minister Manuel Valls put the Picardy region on the highest alert level, that same level that the entire Ile-de-France region, including Paris, is already under.

But it’s hardly the only dangerous place in France. Earlier Thursday, a gunman — dressed in black and wearing what appeared to be a bulletproof vest, just like those who attacked the Charlie Hebdo offices — shot and killed a female police officer in the Paris suburb of Montrouge. One person was arrested in that incident, Paris Deputy Mayor Patrick Klugman said, though it’s not known if the shooter is still at large. 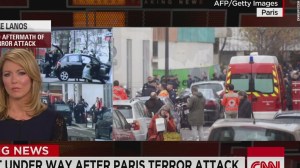 Authorities have called that a terror attack, even if they haven’t outright connected it to Wednesday’s slaying of 12 at the satirical magazine’s Paris headquarters.

As long as the Kouachi brothers are at large, France’s nightmare is not over.

But the European nation’s sense of pride, unity and defiance is just as undeniable.

• Police hunting for the Kouachi brothers have searched their supposed residences in a number of towns, Interior Minister Bernard Cazeneuve said.

• French authorities “will not tolerate any act, any threat aimed at a place of worship” — presumably a mosque, since the attackers were apparently Muslim — “or any French people because of their origin or their religion,” the minister said.

• A ministerial committee has been set up to adapt security measures in the wake of the Charlie Hebdo attack, added Cazeneuve.

• The interior minister said that, in addition to the police officer killed, a municipal official was seriously wounded in Thursday’s shooting in Montrouge. He said that “at this stage we cannot establish a link” between that incident and the Charlie Hebdo attack.

• U.S. Attorney General Eric Holder will travel to Paris to attend a meeting Sunday of international officials convened by Cazeneuve. “The meetings will include discussions on addressing terrorist threats, foreign fighters and countering violent extremism,” a U.S. Department of Justice official said.

Charlie Hebdo to publish next Wednesday

While its business is satire, Charlie Hebdo has been subject of serious venom.

That includes its publication of cartoons lampooning the Muslim prophet, Mohammed, which some found very offensive.

The magazine’s offices were fire-bombed after that in 2011, on the same day the magazine was due to release an issue with a cover that appeared to poke fun at Islamic law.

It was attacked again Wednesday, when two masked men entered its offices not far from the famed Notre Dame Cathedral and the Place de la Bastille.

On their way into the building, they asked exactly where the offices were. The men reportedly spoke fluent French with no accent.

They barged in on the magazine’s staff, while they were gathered for a lunchtime editorial meeting. The gunmen separated the men from the women and called out the names of cartoonists they intended to kill, said Dr. Gerald Kierzek, a physician who treated wounded patients and spoke with survivors.

The shooting was not a random spray of bullets, but more of a precision execution, he said.

The two said they were avenging the Prophet Mohammed and shouted “Allahu akbar,” which translates to “God is great,” Paris Prosecutor Francois Molins said.

Cell phone cameras caught the two gunmen as they ran back out of the building, still firing. One of them ran up to a wounded police officer lying on a sidewalk and shot him point-blank.

It was the deadliest attack in Europe since July 2011, when Anders Behring Brevik killed 77 people in attacks on government buildings in Oslo, Norway, and at a youth camp on the island of Utoya.

But it won’t stop Charlie Hebdo. Pelloux told CNN affiliate BFMTV that thousands of copies of the magazine will be published next Wednesday.

‘It was their only mistake’

The two masked men apparently left behind a getaway car, which police impounded. Investigators found Said Kouachi’s identification card inside the car as they combed it for evidence, Cazeneuve said.

“It was their only mistake,” said Dominique Rizet, BFMTV’s police and justice consultant, reporting that the discovery helped the investigation.

The Kouachi brothers returned from Syria in the summer, USA Today reported, without saying where it got the information.

Officials were running their names through databases to look for connections with ISIS and al Qaeda. The suspects were known to security services, Prime Minister Valls said.

A third suspect, 18-year-old Hamyd Mourad, turned himself in to police, a source close to the case told the AFP news agency. In French media and on social media, classmates of Mourad, who is in his final year of high school, said he was with them at school at the time of the attack.

Cazeneuve said that nine people overall have been detained in connection with the Charlie Hebdo attack.

But that doesn’t necessarily mean authorities are any closer to Cherif and Said Kouachi.

‘Parisians will not be afraid’

The victims’ names were splashed Thursday across newspapers as heroes for freedom of expression. “Liberty assassinated.” “We are all Charlie Hebdo,” the headlines blared.

They included two police officers, Stephane Charbonnier — a cartoonist and the magazine’s editor, known as “Charb” — and three other well-known cartoonists known by the pen names Cabu, Wolinski and Tignous. Autopsies on the victims were underway Thursday, Cazeneuve said.

Flags flew at half-staff on public buildings and events were canceled Thursday, a national day of mourning. Crowds gathered in the rain in Paris in the victims’ honor, many holding up media credentials and broke into applause as the silence ended. The bells of Notre Dame Cathedral tolled across the city.

“I can’t remember such a day since 9/11,” said Klugman, Paris’ deputy mayor. “The country really is in a kind of shutdown in respect and memory of the 12 people killed.”

The day earlier, thousands poured into streets in hordes in a show of solidarity, holding up pens and chanting, “We are Charlie!” Similar demonstrations took place in cities in addition to Paris, including Rome, Berlin and Barcelona.

According to Klugman, “Parisians will not be afraid.”

Multi-vehicle crash on I-80 near Manuel Campos Parkway

A look at the closest congressional races in California

Deputies arrest man in connection to homicide near …