KENSINGTON, N.H. (CNN) — A New Hampshire man killed a coyote with his bare hands Monday after it grabbed his 2-year-old son by his jacket hood and dragged him to the ground.

Ian O’Reilly told CNN he had “never harmed an animal so it was a weird experience.” After the coyote bit him twice while he tried fending it off, O’Reilly kicked it away and used his body weight to suffocate it while holding its snout shut, he said in an emailed statement. 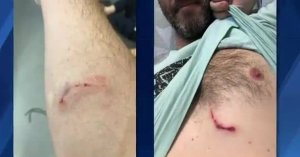 O’Reilly told CNN affiliate WCVB in an interview it took him about 10 minutes to kill the coyote.

“I was able to get its head into the snow and get my hand around its snout, so it could no longer bite me,” he said. “And then, from there, I was able to suffocate it by using my body weight and scissor-locking it until basically expiring.”

O’Reilly told CNN affiliate WMUR in a separate interview that he hadn’t quite processed what happened, even after the fact.

“In the middle of the moment, you’re not really thinking or … recording a whole lot,” he said. “You’re really just instinct.”

O’Reilly’s son was not injured.

An earlier attack from the same coyote?

Pat Lee and her two dogs were sitting on her porch when a coyote attacked all three, biting Lee in the process, according to WMUR. Lee and her dogs received rabies shots as a precaution.

New Hampshire Fish and Game recovered the coyote’s body after O’Reilly killed it and is testing it for rabies and using DNA from the victims’ bite wounds to determine whether the same animal was involved in both attacks.

California has a new strategy to save and collect …

One year after the Caldor Fire

More than one week since Kiely Rodni’s disappearance

Some areas of California could have ‘safe injection …

One year after the Caldor Fire

More than one week since Kiely Rodni’s disappearance