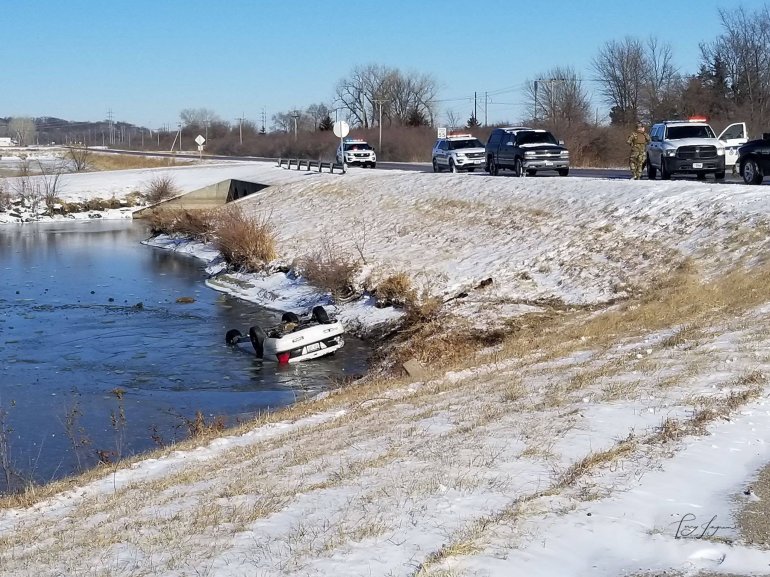 (CNN) — Terry Ingraham went out in the bitter Nebraska cold Saturday to try to catch some shots of eagles, but his camera malfunctioned.

Sitting in his truck, trying to fix it, Ingraham instead caught sight of a dangerous wreck: a 2004 Crown Victoria with three teens in it crossed some railroad tracks, then lost control.

The car careened off the roadway, hit a fire hydrant and landed upside-down in a nearby pond.

Ingraham saw the car stop, fall through the ice and begin to fill with water.

Then Ingraham, who cannot swim, ran down a hill toward the pond. He heard someone screaming.

“Get me out! Get me out!” he remembered them yelling.

Unsure how deep the water was, Ingraham raced in. The air temperature measured in the 20s, he recalled, intensifying the icy water’s bite.

The car kept filling with water.

Ingraham realized the pond, at least right there, only was knee-deep.

He tried to open the sedan’s back door. It wouldn’t budge.

He tried the front door.

It gave, and Ingraham pulled the 19-year-old driver, Jaxon Duin, out, he said.

But two more people were still inside, Ingraham said. And they weren’t moving.

Ingraham grabbed someone, who immediately grabbed back at his arm, the photographer told CNN. He pulled that passenger to safety.

The last rider also held tight to Ingraham as he pulled them out, he said.

The three teens, including 19-year-old Anton Burkovetskiy and someone who’s likely a minor, were taken to Nebraska Medical Center, Erhart said.

“A lot of people don’t have to do that, or probably wouldn’t,” he said of Ingraham’s rescue.

“The water is that cold. If he hadn’t have been there very quickly, it could have been much, much worse.”

Ingraham spoke with one of the teens’ mothers via Facebook, he said, and she thanked him for saving her son’s life.

“If I would have waited, there’s no telling what would happen,” Ingraham said. “I’m just a guy in the right place at the right time.”

SIOUX FALLS, S.D. (AP) — Americans couldn’t resist the urge to gather for Thanksgiving, driving only slightly less than a year ago and largely ignoring the pleas of public health experts, who begged them to forgo holiday travel to help contain the coronavirus pandemic, data from roadways and airports shows.

The nation’s unwillingness to tamp down on travel offered a warning in advance of Christmas and New Year’s as virus deaths and hospitalizations hit new highs a week after Thanksgiving. U.S. deaths from the outbreak eclipsed 3,100 on Thursday, obliterating the single-day record set last spring.

BIRMINGHAM, Ala. (AP) — An Alabama man who spent World War II repairing bomb-damaged trains in France recovered from a fight with COVID-19 in time to mark his 104th birthday on Thursday.

Major Wooten was physically drained and a little fuzzy mentally after battling the new coronavirus but appears to be on the mend, said granddaughter Holley Wooten McDonald.

JUNEAU, Alaska (AP) — The U.S. Bureau of Land Management plans to hold an oil and gas lease sale for Alaska's Arctic National Wildlife Refuge next month, weeks before President-elect Joe Biden, who has opposed drilling in the region, is set to take office.

Conservation groups criticized Thursday's announcement as rushed and based on environmental reviews that are being challenged in court as flawed.

‘It’s a lot at stake’: Local business owners prepare for another round of shutdowns

49ers head to new home in Arizona to host Bills

UPS limits deliveries for some of country’s biggest retailers due to demand, reports say

Joe Biden to keep Dr. Fauci on staff, call for 100 days of mask-wearing

Joe Biden to keep Dr. Fauci on staff, call for 100 days of mask-wearing