SACRAMENTO —  A newly released survey from the Public Policy Institute of California offers more insight into the gubernatorial race and where voters stand on key issues. 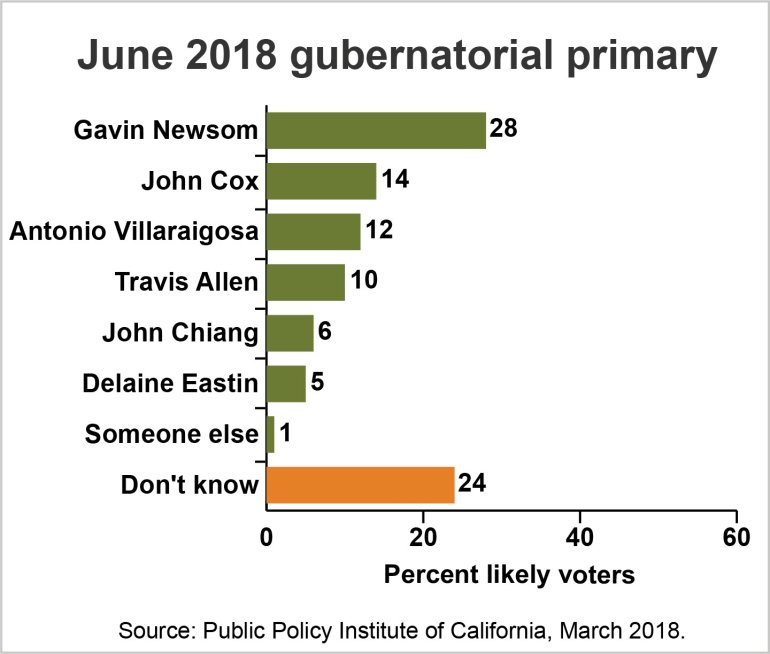 Gavin Newsom has surged ahead of fellow Democrat Antonio Villaraigosa, with 28 percent of likely voters surveyed saying they would vote for him. In fact, Villaraigosa dropped to third place behind Republican John Cox.

Twenty-four percent of likely voters surveyed say they don’t know who they plan to vote for in the gubernatorial race.

Interest in the race has doubled since last December, the poll shows.

A majority of likely voters say they are satisfied with their options — Democrats more than independents or Republicans.

In the U.S. Senate race, incumbent Dianne Feinstein maintains a double-digit lead over her challenger Kevin de Leon — 42 to 16 percent. Thirty-nine percent of likely voters say they are undecided.

Half of all likely voters think the midterm elections this time around are more important than those held in the past. If held today, 53 percent of voters say they would choose a Democratic candidate with 39 percent saying they would go with a Republican.

The majority of Democrats surveyed say they prefer an experienced candidate. A little more than half of Republicans surveyed, 56 percent, would prefer someone new to politics.

As of March, 22 percent of all likely voters approve Congress’ job performance, while far more, 53 percent, approve of the lawmaker representing them in the U.S. House. Governor Jerry Brown’s approval rating among likely voters sits steady with 54 percent approving his job performance.

Immigration and the Border Wall

In immediate response to the federal government’s lawsuit against California, 49 percent of likely voters say the crackdown on immigration was mostly a bad thing. The survey found that California’s registered younger adult voters, between the ages of 18 and 34, as well as Democrats, were more likely to say so. At 81 percent, Republican voters think a firmer stance on immigration is a good thing.

A little more than half of the state’s likely voters say they would support the state and local government’s actions in protecting the rights of immigrants who are in the country illegally. Democrats and Republicans squarely oppose one another on the issue, with 79 percent of registered Democratic voters in favor of local policymakers protecting immigrants and 78 percent of Republican voters against them doing so.

Trump’s border wall had a likely response on both sides, with 71 percent of registered Republican voters surveyed in favor of the wall and a strong 90 percent of Democrats surveyed opposed. Sixty-two percent of likely California voters oppose building the wall.

Ten percent of likely voters would prefer to hear candidates discussing guns, gun control, or school safety over anything else.

The survey found that 70 percent of likely voters would want stricter gun laws, which is up 15 points since last May. Almost half of the registered Republican voters, 48 percent, would want laws surrounding gun sales to be stricter. That number is up 20 percent from last year.

Democrats and independents want gun laws to be stricter overall, at 87 percent and 68 percent respectively.

Which Valentine’s Day gift will be the most popular …

Before picking up the conventional bouquet or box of chocolates, here are seven Valentine’s Day gifts that will be the most popular in 2023.

How to stay inside this Valentine’s Day by ordering …

No matter which wine you’re looking for this Valentine’s Day, from cabernet to pinot grigio, you’ll be able to find it online.

Since a romantic meal is the focal point for many couples on Valentine’s Day, having the best table decorations is crucial to creating the proper mood.

Near Freezing Temperatures in the Sacramento Area

Three state buildings in Sacramento could be turned …

Family questions why roller coaster is in use after …

Firefighters call for new ways to put out electric …

Tesla fire on Hwy 50 shows how difficult they can …

Near Freezing Temperatures in the Sacramento Area