One Stockton teenager is shaken up after a man tried to kidnap her on her way to school. Thankfully she was able to fend off her would-be attacker.

Home surveillance video from one neighbor in the northern Stockton neighborhood where the attempted kidnapping happened, near the intersection of Inverness Way and Fox Creek Dr., caught audible screams from the seventeen-year-old victim as she struggled to fight off her attacker. The video also shows the suspect driving away in a four door sedan. 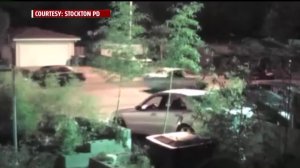 “Our victim did exactly what you are supposed to do, make a lot of noise and fight off your assailant,” said Silva.

The girl was on her way to McNair High School, walking alone around 6:30 a.m., along Inverness Way like she does every morning, when a man grabbed her, and tried to push her into his car.

“I seen this girl get tackled on the ground, said Christian Barriga, the first to see the attack. He came running.

“She managed to get away…she was running I was like do you need help? I said it three times, she was so scared, she just kept running,” said Barriga.

It was from Tammy La’s home that cameras caught the suspects escape, and the screams, so loud she says they woke her son up.

That is, until her son saw cops show up. The two reviewed the video, and handed it over to police.

“Yeah, that will help a lot. Just the car, but it’s so bad we didn’t get the license plate,” said La.

“I was shocked. I didn’t really think that anything would happen like this,” said the victim’s classmate Jennifer Sanchez.

She also walks to school along the same route, at the same time as the victim.

“I’m going to start getting a ride with my friend to school,” said Sanchez.

“We need to get this suspect off the street before he harms someone else,” said Silva.

Silva says anyone with the audacity to attempt a kidnapping could do it again.

Police are hopeful the public can help track their suspect down. The suspect is described as either Asian or Hispanic, about 5’8 180 lbs. He drives a silver or possibly gold colored 4 door sedan.

Themed food and drinks are a surefire way to make your party stand out, and looking at past Grammy nominees is a great way to get inspiration.

Love the Grammys? We have everything you’ll need …

With Grammy night around the corner, here are some fun ways to embrace the theme, boost your entertainment and make your guests feel a part of the festivities.

NuFace devices use low microcurrent voltage similar to natural electric currents in the body and are safe and painless on the skin.

Travelers in the Sierra bracing for snow

Voters will determine if they will also have a role …

Some light storms expected through the weekend

How to find Black-owned businesses in Sacramento

Man dies from ‘traumatic’ injuries after being hit …

Voters will determine if they will also have a role …