The top admiral overseeing US Naval forces in the Middle East, Vice Adm. Scott Stearney, was found dead in his residence in Bahrain on Saturday, the Navy said in a statement.

While his death is being investigated, officials say there is no evidence of foul play at this time. 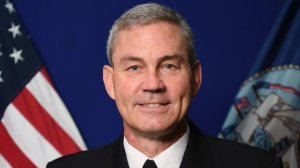 “This is devastating news for the Stearney family, for the team at Fifth Fleet, and for the entire Navy,” Adm. John Richardson, the chief of naval operations, told CNN Saturday. “Adm. Stearney was a decorated professional and a devoted father, a devoted husband and a good friend.”

“I’d just ask that everybody keep the Stearney family in their thoughts and prayers as they move through this and also maybe to respect their privacy as they navigate these very, very difficult waters,” he added.

Richardson said the Naval Criminal Investigative Service and the Bahraini Ministry of Interior are cooperating in the investigation. He added that he was unaware of any investigations into Stearney.

The US Navy’s Bahrain-based Naval Forces Central Command, which the Fifth Fleet is part of, oversees operations in areas like the Red Sea and the Persian Gulf. The command is seen as critical to US security interests given the challenges of Iran and Iran-backed Houthi rebels in Yemen, both of which the US sees as potential threats to shipping in the region.

A tremendous amount of commercial shipping, including large amounts of oil and gas, travels through the waters overseen by Fifth Fleet.

The deputy commander of the Fifth Fleet, Rear Adm. Paul Schlise, has assumed acting command, Richardson said, adding that the Navy’s “operations and responsibilities” in the region will continue uninterrupted.

Richardson announced that Vice Adm. Jim Malloy, the deputy chief of naval operations for operations, plans and strategy, will fly out to the region Saturday to take interim command until a permanent successor is chosen, a clear signal as to how critical the Navy views the region.

Stearney, a native of Chicago, graduated from Notre Dame in 1982 before being commissioned as an officer in the Navy and later served as an F/A-18 strike fighter pilot.

Prior to taking command of Fifth Fleet in May, he held several senior posts, including commanding a carrier strike group and serving as director of operations for US Central Command.

Murder suspects arrested after one calls to turn himself in, Stanislaus County Sheriff’s Office says